This lavish illuminated edition of Aulus Gellius’Noctes Acticae was made for a patron whose name we unfortunately do not know. The crest, which is set in a laurel wreath between two athletic put­ti in the bas-de-page on fol. 91r, and illuminated with a rinceau in the pure Ferrara style, has not yet been identified. The manu­script may have belonged to a physician or a natural philosopher. Many notes in the margin of the text explain the technical and scientific terms used. The choice of this work by Gellius, with its we­alth of information about the philosophical and scientific knowled­ge of the Ancients, also suggests it was far a man of science. This was a well-known text in the Middle Ages. We know that Guarino da Verona owned a copy, from which our codex may have been ta­ken, and Angelo Decembrio takes it as a model for his De politia litteraria.
The colophon (fol. 419v) shows that the copyist, who is also anonymous, finished his work in Bologna in 1448, “indictione un­ decima. pridie calendas julii” – in other words, on 30 June. The illuminator was Guglielmo Giraldi, who proudly places his signature in the margin of the illumination on fol. 90v: CVL D F P, Gulielmus de Ferraria pinxit. The illustration shows a swee­ping urban view, described with exquisite clarity in its perspective lines, with neatly arranged buildings that appear almost to form a stage setting: the actors can be seen in a square, and a central stre­et opens up between two architectural wings, leading up to the ca­stle we can just make out on the hill. On the left, there is a pier with boats. The illuminator has imagined Athens, where the learned as­sembly is taking place, even though the city – almost “Albertian” in its shapes – recalls the concept of the ideal city. It pays tribute lo Ve­nice by citing the two columns on the pier with the statues of a young man and of a lion, the latter holding a cartouche bearing the words “Civitas Athena(rum) “. This description of the city, which is rationally laid out, is however not without its Gothic overtones, as we see in the building giving onto the sea, with its curious avant­-corps with column-bearing lions and a dome hidden by a tall pedi­ment. 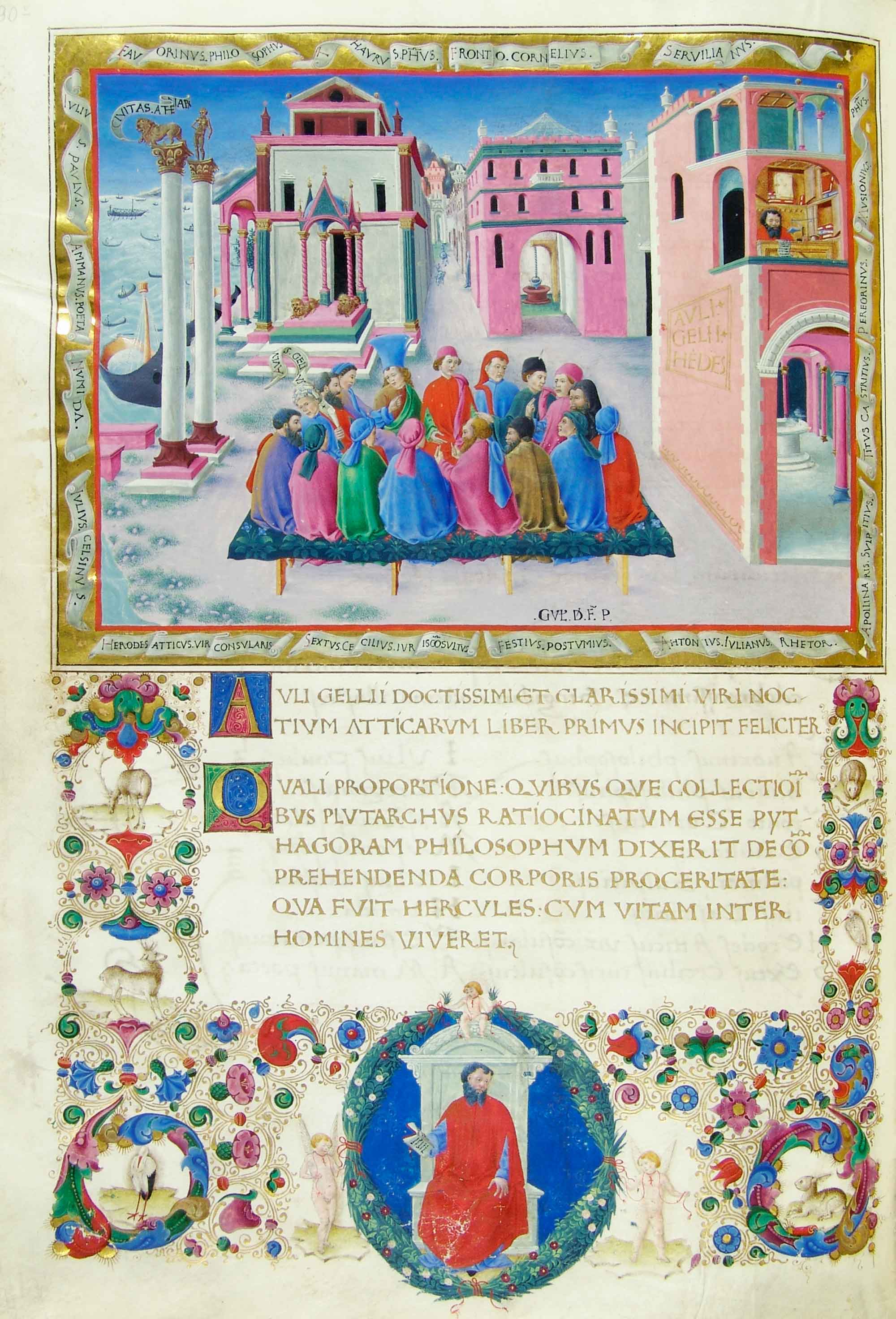