The Franciscan Friar and mathematician Luca Pacioli (Borgo San Sepolcro c. 1445 – Venice 1514 or 1517) is famous mainly for his treatise De divina proportione, of which only two handwritten copies survive: one in the Bibliothèque Publique et Universitaire in Geneva, and the copy in the Biblioteca Ambrosiana, which is con­sidered the better one.
The Ambrosiana manuscript is a codex on parchment with 130 folios in elegant humanistic script, and bears the date 14 December 1498. It was donated to the library in 1637 by Marquis Galeazzo Arconati, along with other Leonardo manuscripts including the renowned Codex Atlanticus.
As the title indicates, the main subject of the treatise is the study of the golden section, where a segment ( a-b) can be divided into un­ equal parts ( a-e and c-b) so that the whole is to the greater part as that part is to the smaller part ( a-b : a-e = a-e : c-b ).
The mathematicians of antiquity and the Greek philosophers were already fascinated by this curious ratio, which appeared to re­flect perfection and divine harmony: hence the use of the adjec­tive “divine” to describe the “proportion” governing this unique re­lationship.
Leonardo da Vinci, who met Luca Pacioli at the court of Ludovico il Moro in Milan in the late fifteenth century, has left visi­ble proof of how applying the golden section to solid geometry could become an opportunity for the creation of a splendid work of art. In fact, the mathematician monk directly commissioned from the Florentine great master a series of drawings of sixty solids, construct­ed on the basis of the golden section and painted in watercolours, and the result, thanks to the interplay of perspective and colours, was a fascinating series of geometric figures united by the common idea of perfection.
Each drawing becomes a true watercolour painting. The solid is shown, in compliance with the laws of gravity, hanging from a scroll, which identifies it by its Latin title (in other words specifies which solid it is and what its characteristics are). Underneath the drawing and watercolour of the solid in question is an inscription with the title in Ancient Greek, the language of the early mathe­maticians and the great philosophers. We begin with the sphere and end with the amazing polyhedron with seventy-two faces, passing through all the possible and imaginable variations on the way.
The final overall effect is of a “gallery” of images, almost un­earthly in their perfection. 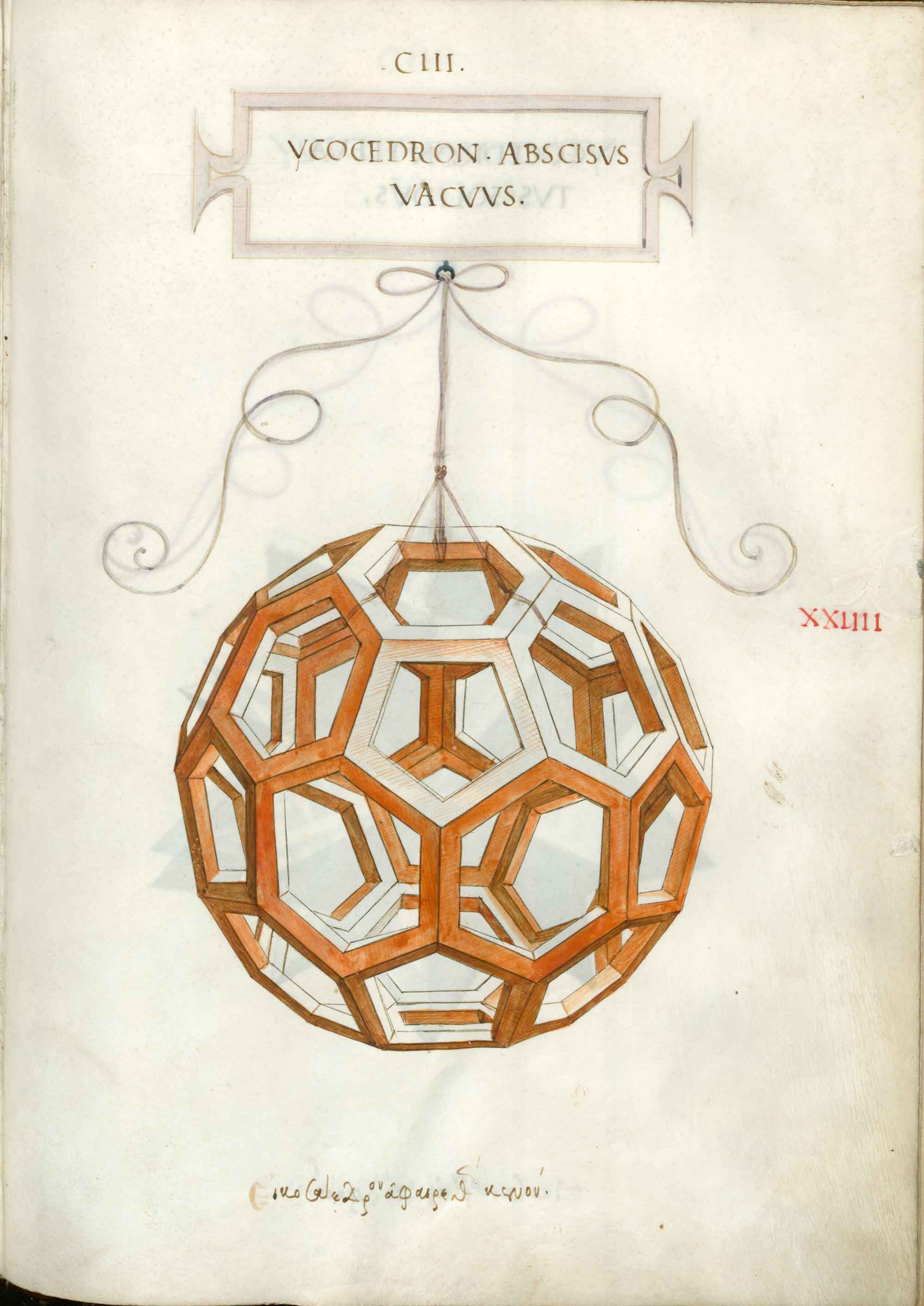