Bramantino was aged just twenty when he painted this panel, but he had already acquired the ability to create works that were highly complex in terms of their symbolism. The figures we see are clearly divided into two groups: a group of musicians, who are apterous (wingless) angels, are playing instruments reproduced very faithfully, though without strings. In the group of worshippers, we can see on our left a figure – the only one, with the exception of the angels – who is not looking straight at the Child, but rather at the woman in the foreground on the right. In the past, various scholars suggested three different identities for this person – Emperor Augustus, the poet Virgil and the god Apollo. Here we believe that it is, without any doubt, Apollo. He is identified by a laurel wreath and his long, characteristic torch, which precisely reproduces the many examples that are shown in Greek and Roman artefacts. This Apollo, now old and ugly, leans on his extinguished torch under a dead branch, which symbolises the end of paganism. However, the way he looks at the woman standing in the foreground on the right, who is quite probably a sibyl, and who is in turn looking at the Child, appears to be an invitation to consider the classical age as a good and necessary preparation for the age of Christ. This was a common idea already in the Middle Ages, and it is no coincidence that it is a classical-style arch that forms the backdrop for the scene. The work also contains an important Mariological aspect, for close observation of the geometry of the composition shows how the Virgin and Child are perfectly inscribed within an isosceles triangle, thus symbolising a particular theological doctrine, which is that of the Immaculate Conception of Mary, according to which the Mother of God was preserved from original sin. This might also be confirmed by two further aspects: one is the presence of Saint Francis (identified by his stigmata) and Saint Bernardino of Siena, for it is known that the Franciscans maintained this theological aspect in their preaching. The other is the presence of Salome behind the Madonna, next to Joseph. She is identified by her shrivelled hand, which she received as a midwife for not believing in the virgin birth, as we are told in the apocryphal Gospel of James (the presence of this figure in a Nativity has a precedent in the one made by Robert Campin in 1425, now in the Musée des Beaux Arts in Dijon). The painless delivery of Mary is a sign that she is free from the curse on Eve for having committed the original sin (“in sorrow shalt thou bring forth children”, according to the Book of Genesis). Lastly, it should be noted how the decoration on the capital on the pilaster of the arch recalls that of the capitals on the pilasters in the church of Santa Maria presso San Satiro, which was built by Bramante, and thus a clear tribute by Bramantino to his illustrious master. 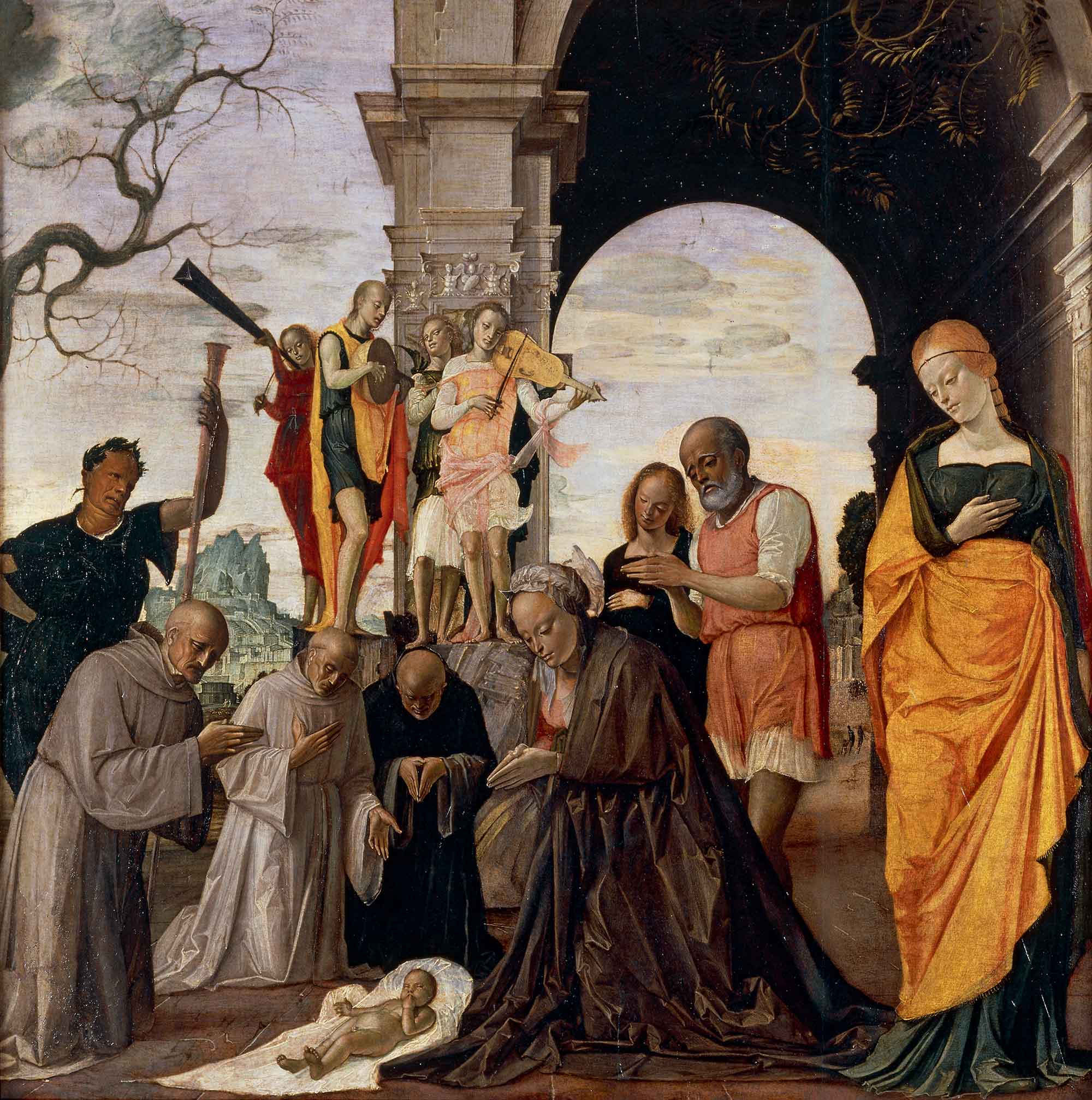