As part of Restituzioni 2022, the safeguard and enhancement program that Intesa Sanpaolo has been conducting for almost thirty years in favor of the national artistic heritage, three works from the Pinacoteca Ambrosiana have been restored: The Battle of Constantine by Giulio Romano, the Dormitio Virginis by the Master of the Dormitio Virginis Massari and Winter landscape with ice skaters by Barent Avercamp.

Restorations have been carried out in the last two years on a total of 87 groups of works, belonging to 81 different institutions, including public and diocesan museums, churches and places of worship, archaeological sites, an effort in which the whole national territory was the protagonist.

Of the three restored works of the Ambrosiana, the Winter Landscape with Skaters can already be admired in room 13 of the Pinacoteca, while The Battle of Constantine by Giulio Romano and the Dormitio Virginis by the Master of the Dormitio Virginis Massari are currently exhibited at the Gallerie d’Italia in Naples and will return to Ambrosiana at the end of September 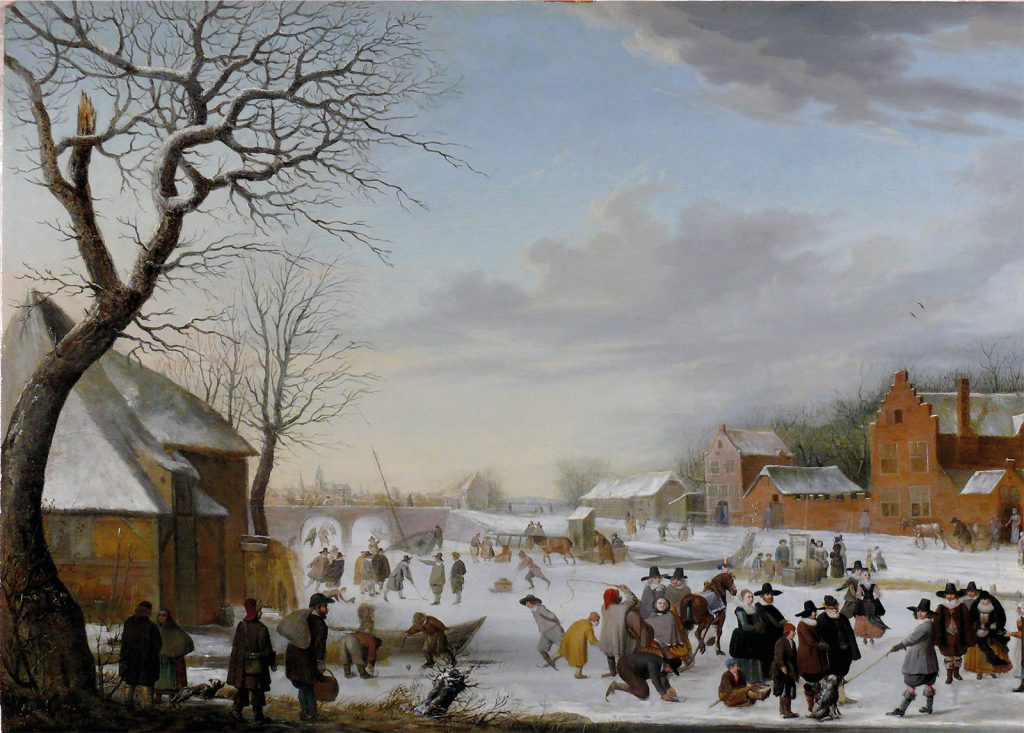 Hendrick Avercamp is known for being the creator of the winter landscape scenes in Holland; his follower for this genre painting and for the style was his nephew Barent, his skilled imitator, to the point that for certain works, as in this case, it is difficult to establish which of the two a work is to be attributed. The scene offers us a great variety of characters, some of which are rendered with great naturalness, such as the skater with his hands behind his back or the man who plays with a spinning top. The artist uses a very low point of view, which allows a rather wide view, and animates the central space of the frozen river and its snow-covered banks with a varied humanity, portrayed with the skill of an illuminator and a very thin brush, both in the diversity of his occupations and in the variety of attires. However, the extraordinary outburst of sky prevails over everything, which occupies almost two thirds of the painting, crossed by pearly clouds and lit by pink hues on the horizon, obtained through highly transparent glazes. Before the recent restoration, the panel had numerous small repaintings, generally very localized, in particular at the central axis, hidden under two layers of paints and further circumscribed coatings, which had produced a general darkening of the tones and removed brightness from the scene.

The preparatory study on paper already known in the past as “a battle of Giulio Romano”, for the fresco commissioned by Pope Leo X in the Sala di Costantino, represents an instrument of investigation of the artist’s work of great interest. The fragment of the cartoon, of which the restoration has allowed an unprecedented reading of all the drawing and chiaroscuro values, was used to fresco the group of soldiers who, in the composition, are distributed to the right of the figure of Constantine up to the correspondence of the Ponte Milvio. Very clearly the cartoon was made, according to some scholars, precisely following the Raphaelesque model of the Louvre of the Battle of Constantine radically, reinterpreted by Giulio Romano, endowing the figures with an unprecedented naturalistic robustness of the physiognomies and extreme compositional and expressive tension, not without significant variations. Through the study and restoration for the Restituzioni project, the process of transferring the fresco to the wall of the room is made more aware which brings out, with great evidence, how the acute compositional and expressive tension detected by the drawing of the cartoon is penalized by the drafting, weighted down by the brushstrokes with which the cartoon is translated on the wall, which rather favors the spectacular and theatrical, taking into account the size of the work. 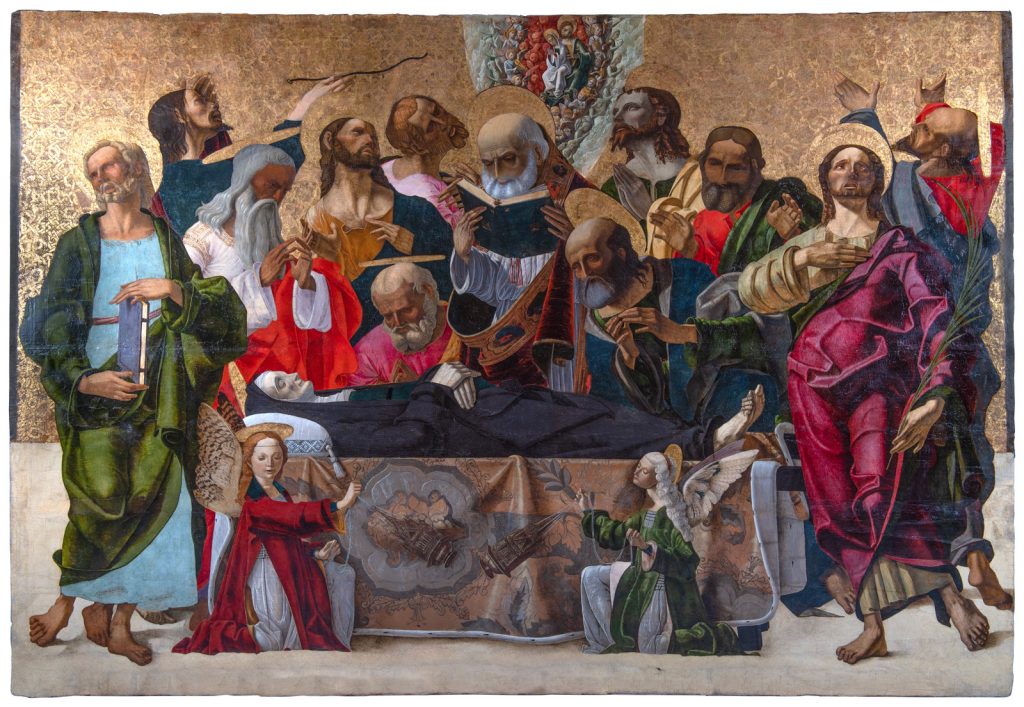 The large table is one of the most enigmatic pieces of Ferrara’s Renaissance production. Attributed to the so-called “Master of the Dormitio Virginis Massari”, active in Ferrara at the end of the 15th century, it represents the Virgin who fell in the sleep of death (hence the traditional term of “dormition”) and her assumption into glory, thus as it is narrated in the apocryphal Gospels and has been received in the tradition of the Eastern Churches. The twelve apostles crowd around the bier where the newly dead Madonna lies, engaged in a liturgical celebration, against the backdrop of a golden sky, dazzling with light, which alludes to the moment of the encounter with Christ; many of the characters are identifiable thanks to the apocryphal texts that narrate the episode, including the two angels Michael and Gabriel in the foreground. From the point of view of style, the elements of Ferrara culture (which refer above all to Tura and Cossa) do not seem to fully resolve the complexity of the master’s language, which shows a Paduan-Squarcionesque component, perhaps linked to his youth training (especially if is to be identified, as prudently proposed, with the illuminator known as “Master of the Seven Virtues”), enriched by the possible knowledge of works by Canozi da Lendinara, all declined with a perspicuity of sign in debt with the Flemish world. 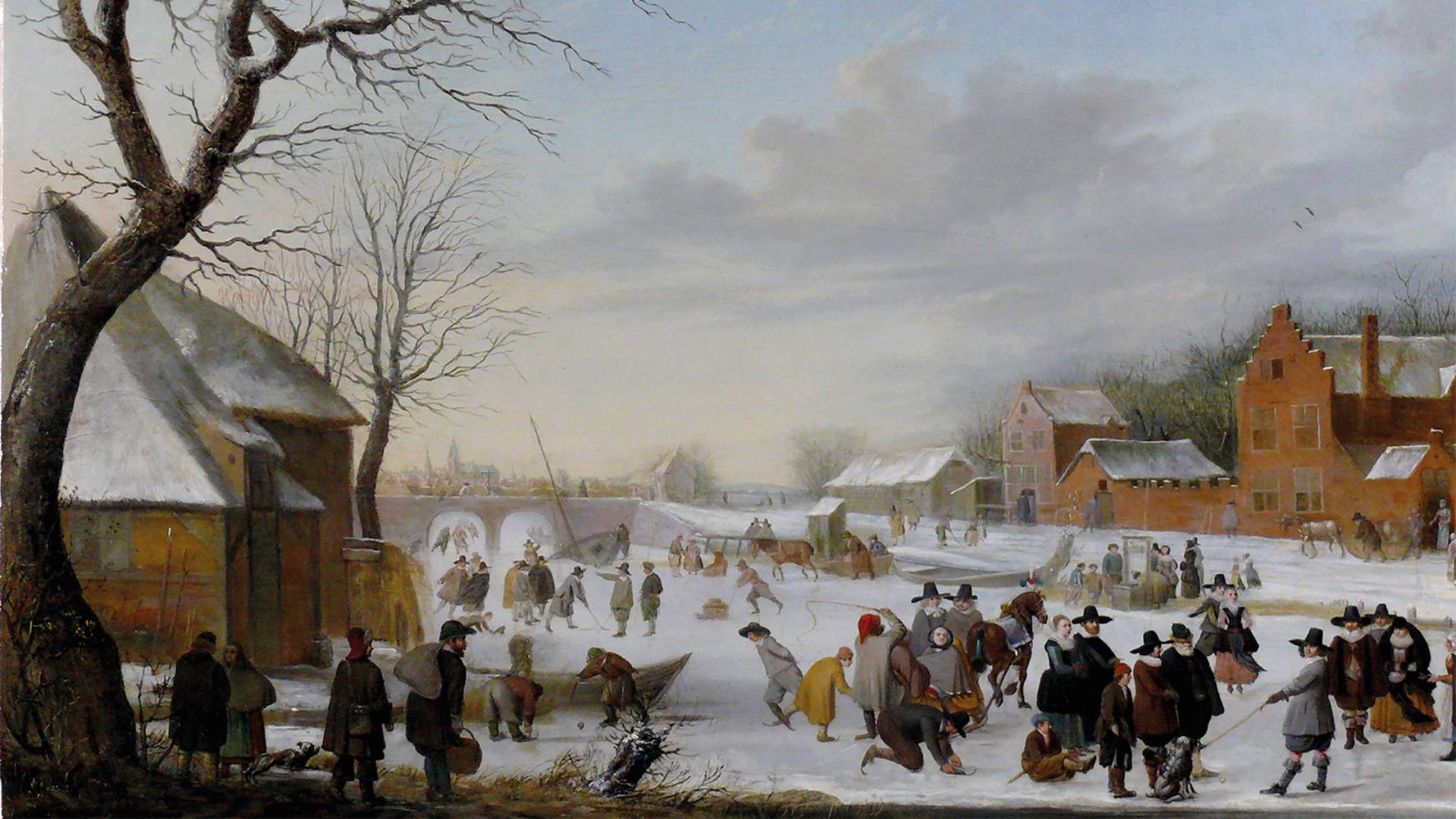